Contemporary technologies such as high-throughput genome sequencing now enable the measurement of biological systems with unprecedented scale, power, and precision, creating the opportunity to decipher the genetics that underlie human diseases. The overall goal of our laboratory is to develop novel computational strategies that use these data to understand complex genetic systems in which multiple genes and environmental factors combine to affect biological outcomes. These methods aim to map complex genetic architecture and infer models that predict the outcomes of genetic and environmental variation. Our work involves deriving network models of interacting genes, integrating disparate phenotypic and molecular data types, critically evaluating models with experimental tests, and understanding how biological information is encoded in genetic networks and genomic data.

The observations that a gene can affect many traits (pleiotropy) and that a trait can be affected by multiple interacting genes (epistasis) imply that cellular behavior is often the result of a genetic network involving multiple biological processes. We aim to exploit patterns of pleiotropy and epistasis to infer models of how genes interact to influence multiple phenotypic measures. To this end, we are devising novel mathematical and statistical methods using model organisms as platforms for development. By addressing the complexities of pleiotropy and epistasis we hope to improve the predictive power of network models and better reveal underlying biological mechanisms. We have recently released a software package called CAPE (Combined Analysis of Pleiotropy and Epistasis) to use this approach with genetic data.

Chromosomal crossover via homologous recombination is both a necessary step in mammalian meiosis and the method by which genetic variation is redistributed throughout a population. Genome-wide assays of chromatin states and gene expression are revealing molecular details of this process, which is initiated with site selection by the protein Prdm9. In collaboration with the Paigen and Handel labs, we are combining data on epigenetic states with transcript abundances to understand the molecular mechanisms that drive recombination and meiosis in the mouse testis. The aim of this work is a comprehensive model of when, where, and how molecules like Prdm9 act to guide germ cell development.

Complex genetics in the development of late-onset Alzheimer’s disease

Once diagnosed, there are few effective treatments for late-onset Alzheimer’s disease. The development of early diagnostics and reliable model systems for therapeutic development are crucial for advancing potential treatments for this disease. In collaboration with the Howell Lab and the Genetic Resource Science group, we are studying hundreds of whole genome sequences from the Alzheimer’s Disease Sequencing Project to identify potential genetic factors and using advanced genome engineering technologies to create faithful mouse models for late-onset Alzheimer’s. Furthermore, we studying the transcripts of aging mice to identify early molecular signatures of Alzheimer’s disease development, which might serve as biomarkers that can be detected decades before the neurodegenerative symptoms appear.

The genetic heterogeneity and complexity of cancer have posed significant challenges to the design of effective therapeutic strategies. The characterization of mRNA-expression subtypes in breast cancer facilitates genomic and genetic studies to identify biological processes and pathways that drive distinct molecular subtypes and elucidates the potential feasibility of subtype-specific drug targets. However, such therapies tend to have limited efficacy, often due to unpredicted compensation in the network of mutations. To address this problem we are applying a multi-trait genetic interaction analysis to genetic and genomic data from The Cancer Genome Atlas (TCGA) breast cancer project. These genetic networks simultaneously model multiple phenotypes to identify direct genetic influences as well as influences mediated by genetic interactions. We are discovering how somatic copy-number variations and other mutations in oncogenes and tumor suppressors interact to affect gene expression modules that contribute to distinct breast cancer subtypes.

Revealing the genetics of molecular epigenetics

Recent initiatives like the ENCODE project have mapped regions of the genome that are believed to regulate gene expression through histone modifications, DNA methylation, and proteins that bind DNA. These regions often harbor variants that have been linked to human disease in genome-wide association studies, suggesting that genetic variation modifies gene expression by changing the regulatory chromatin state. We are carrying out a systematic study of how genetic variation in laboratory mice affects chromatin states in response to environmental stimuli. This study is providing concrete evidence for genetic-epigenetic interactions that potentially underlie human disease.

The study of molecular epistasis has been used for decades in mapping pathways of linear information flow from gene to gene. However, the genetic complexity inherent in many biological systems can confound this strategy when the system is viewed on a genomic scale. Instead of mapping linear pathways, large-scale networks of genetic interactions tend to feature tangled modules of genes that function together to carry out cellular processes. Furthermore, given the prevalence and diversity of genetic interactions, it is often unclear how to optimally define the rules of genetic interaction that form the links in these networks. We are developing methods based in information theory to measure the information content of networks. This quantitative measure of complexity can serve as scoring function to find the most informative network from a given genetic data set. From this work we hope to develop both practical tools for genetic analysis and fundamental insights into how networks encode information. 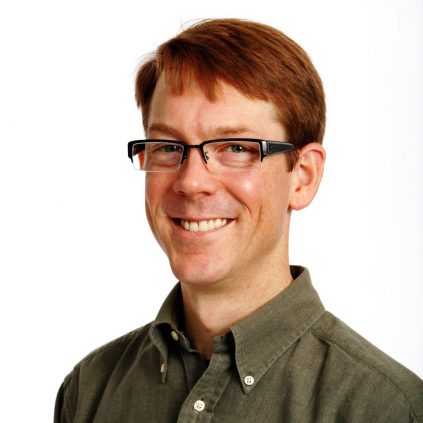